Notes on my morning coffee, vol 2.

The dream is alive.

Style, as much as it seems to us to be important, has nothing to do with what makes a story compelling, or enduring. Its the emotional trajectory. The ability to balance tension, keeping the reader at the edge of being satisfied, then bringing it all crashing down, then BAM another rocket past the moon.

When I went on cruise in 2013 I read a book about the benefits of pessimism. It feels good to be so thoroughly vindicated. The perpetually optimistic disturb me. I bet that this is a trait that needs to be super fine tuned in the general population. You need a certain number of pessimists in any group to make sure the group doesn't self destruct, yet everyone hates them. Can't live with em, CAN'T LIVE WITHOUT THEM. Literally the human race would be dead already.

the benefits of of being an asshole

This is amusing. Apparently the roman catholic church is the only religion that is too simplistic to incorporate the existence of extraterrestrial life. I argue something even more strange. I think that the Roman Catholic religion may be too simple to integrate the fullness of Human Life. The suppression of Gnostic doctrines in the old days may have sealed the church's fate, as those teachings were attempting to integrate concepts of spirituality that would have threatened the power of the political structures the church was building. The spiritual path only ends in one place. The Holy Roman See contends that in order to reach that place, you have to travel through another actually existing external entity. This is at odds with the conclusions reached via Buddhism, Taoism, Hinduism. In these traditions consciousness itself is seen as 'part of the problem' in terms of spiritual experience. Buddhism goes into wonderful detail with respect to the common problematic configurations of consciousness that one may encounter along the spiritual path. Prajna Paramitta is described as experience without reflection, while consciousness is defined as the self reflective function.

Only the human animal is burdened with these false selves; the complex of sensations, ideas, emotions which reflect upon themselves in infinite variety. The contents and the container are taken to be the mind. But none of these things are the mind. Like the old man says, the mind that can be named is not the true mind, for this would require first that we abstract and reflect and differentiate within "the little mind", mini-me, the ego, and therefore our referent would no longer be True Mind, but its reflection within Ego.

Below is live footage of The Author and the author. 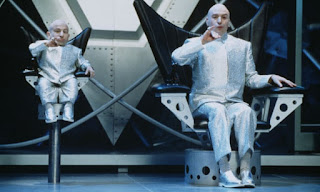